At the Cannabis Europa conference this week, business interests will be well represented – to the dismay of veteran campaigners
— Read on www.theguardian.com/society/2019/jun/23/cannabis-market-big-money-completely-gentrifying-europa

Song available on Apple Music, Amazon, and streaming on Spotify and Deezer

A.I. for surveillance is here. From Elon Musk’s OpenAI—a nonprofit institute for artificial intelligence ethics—to Ray Kurzweil’s The Singularity is Now, to The Internet of Things, it’s clear. We have seen the future. And it is A.I.
Good, evil or amoral? Threatening or hopeful? Equalizing or racist and elitist? A.I. is whirling like a dervish Cloud few fully understand, sweeping up our data, our privacy and some believe, our future identities, as it goes.

For Zorbitor, digital impresario and pseudonymous privacy activist, what’s most interesting in all of this are human behaviors that defy rationality. When surveillance cameras are read by surveillance robots, when sousveillance watches the watchers in return, the day for recognition is at hand. This year on August 16th (the seventh annual International Wave at Surveillance Day) benign yet meaningful action, replicated on the same day worldwide, would be certain to give A.I. a run for its oh-so-rational money, Zorbitor believes. “It would be like asking SIRI what to name your lawn. Saluting that system with an internationally benign gesture, alone or in groups of wavers, shows awareness that surveillance is there, but more importantly, that sousveillance by human beings is alive and well. The day we stop doing that—the day we let that go—will be a sad one. The human element is something that cannot be replicated. Together wavers may well confound A.I., if only for a day, because hey, we’re only human, right?”

More on International Wave at Surveillance Day and a primer on the history of video surveillance appears on the event’s feature page at ‘Days of the Year’ at https://www.daysoftheyear.com/days/wave-at-the-surveillance-cameras-day/ 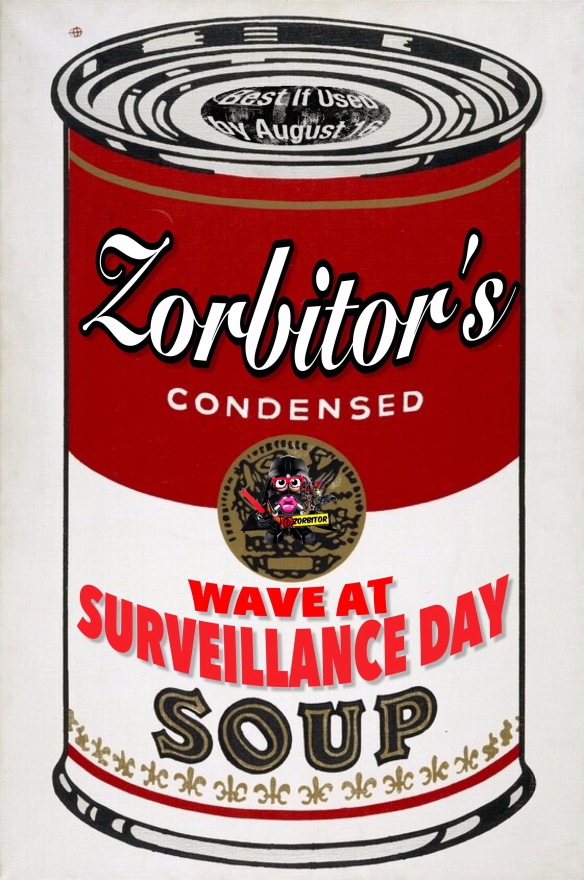 It’s no secret that Facebook founder Mark Zuckerberg covers his laptop camera and microphone jack, as reported by The New York Times on June 22nd. The paper also notes documents unveiled by Edward Snowden reveal that at least two National Security Agency programs are designed to ‘take over’ home computers.

Even more alarming, sousveillance has brought to light the often deadly acts of those officially tasked with watching over us. Security cameras. Bodycams. Dashcams. The tide of the watchman shows no sign of receding. For good or for evil? One is led to wonder: Surveillance. Is it our new moral compass?

August 16th will mark the world’s 6th annual Wave at Surveillance Day, a chance for the watched to reach out to the watchers both at home and in public venues.

When discussing last year’s event, futurist David Brin stated, ” . . . ‘waving’ is just the beginning of our determination to look back via ‘sousveillance.’”

Indeed, saluting your own laptop or phone on August 16th is just the beginning. Like Pokemon Go, observing Wave at Surveillance Day is more satisfying in an outdoor, communal setting. “It’s a teachable moment,” says Zorbitor, promoter and pseudonymous privacy activist. “Kids should be aware of surveillance and realize that only a few decades ago this kind of oversight existed only in science fiction. People were freer in a sense, but was that a positive thing? This is a good thing to talk about—a good question to ask. By contrast, today, our civilizations’ moral choices are being made in front of what might be termed the ‘all-seeing eye’. What does it mean for humanity to be recording its every moment? It’s worth slowing down, at least for one day, and considering it.”

The roots of Wave at Surveillance Day are murky but awareness and recognition are at its core. As The Daily Dot’s Aaron Sankin concluded about the event last year, “ . . . anything that gives everyday Internet users cause to think critically about their online footprint and how its security can be breached, is likely a positive for the overall health of the Web.”

For more information on Wave at Surveillance Day and the history of video surveillance itself, see the event’s feature page ‘Days of the Year’ at

As the entry says, “Wave! The more people doing it, the cheerier the world will be, if just for a moment!” (And look for Wave at Surveillance Day next year in Chase’s Calendar of Events 2017.)